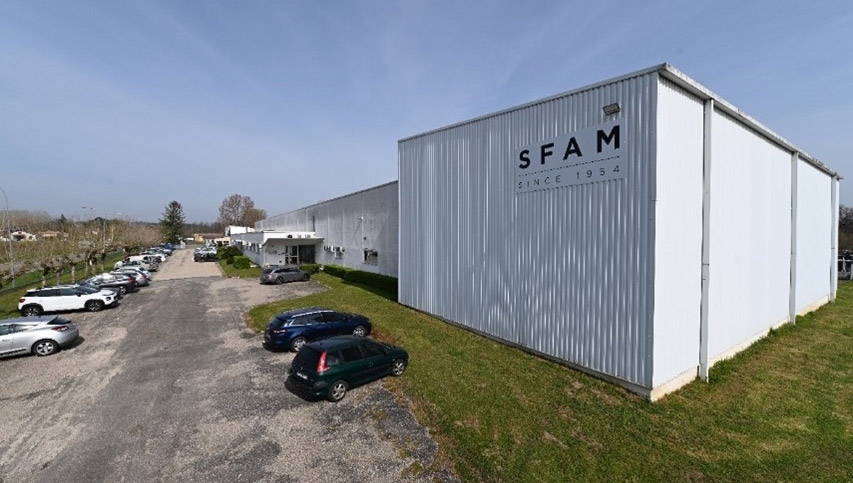 Double-tips glass ampoules, with a capacity of between 1 ml and 20 ml, are manufactured in a glass factory such as SFAM, and delivered empty to the client laboratory, which fills and seals them.

The manufacture of a double-tips glass ampoule consists of:

The double-tips glass ampoule is a primary packaging, i.e. a packaging that is in direct contact with the active ingredient of the medicine or food supplement. As a result, the composition of the glass of which the ampoules are made is regulated by the pharmacopoeia.

1. Glass, the raw material used for the manufacture of double-tips ampoules

The European Pharmacopoeia provides for the following types of glass for containers:

A glass is said to be neutral when, over time, it releases very few sodium ions (in particular) into the liquid inside the container. Ordinary soda-lime glass is not neutral in the pharmacopeial sense. Type I glass is a borosilicate glass, which releases about ten times less sodium ions than soda glass.

Pharmaceutical glass ampoules are also referred to as yellow glass 2nd class, not to be confused with type II glass. This is a “semi-neutral” glass, with a much lower release than ordinary glass, which is generally reserved for drinkable ampoules.

This is because the surface treatment does not apply to glass ampoules, but only to vials (with a few exceptions).

The raw material used to manufacture double-tips glass ampoules is a semi-finished product: the glass tube. This glass tube, made by stretching and blowing at the end of the melting furnace, is delivered to the processing glassworks, such as SFAM, in the form of approximately 1.5 m long sections, which are already the same diameter and thickness as the ampoule to be made. The glass processing plant produces the glass ampoules by stretching these tube to form the two tips. 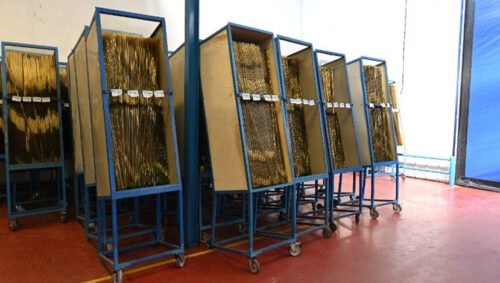 Two types of glass are mainly used for glass ampoules:

2. Glass tube forming, the first step in the manufacturing process 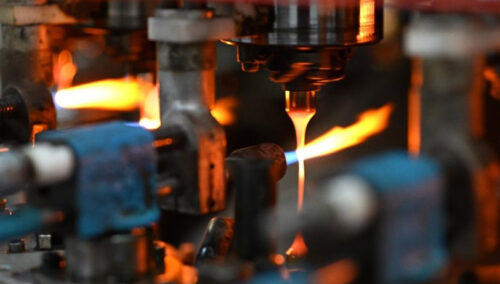 The double-tips glass ampoule is manufactured on vertical machines. It is delivered to the customer laboratory with a closed tip (the beaded tip) and an open tip (the cut tip), which will then be sealed by the laboratory after filling.

The video on SFAM’s website allows to understand the manufacturing process described briefly below. 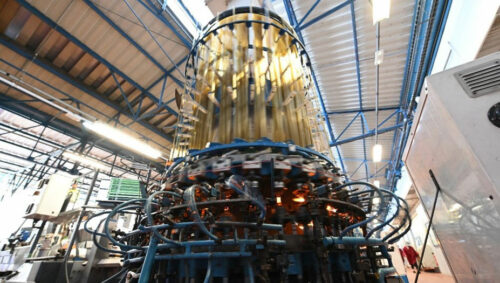 The vertical machine is a carousel on which 24 to 36 glass rods are placed, thanks to an “automatic loader” robot that positions the glass rods vertically on the carousel, which is in permanent rotation. A series of torches then stretches the rods to form the two tips as the tube rotate around the carousel and descend by gravity. A knife is used to break the stretch of the glass to form the tips, and a final torch is used to close (bead) one of the two tips by heating it slightly. 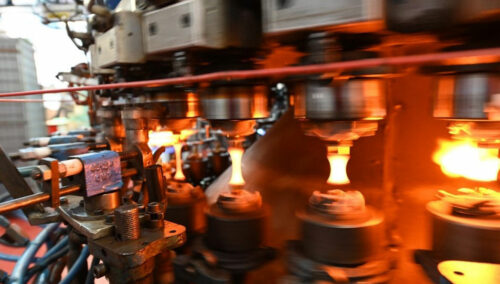 In the same cycle, the cut tip of a glass ampoule (which beaded tip was made in the previous round), and the beaded tip of the next ampoule is made. Thus, we have a start of the tube with only a cut tip, then an end of the rod with only a beaded tip.

Finally, the finished glass ampoules are collected on a conveyor belt for finishing operations.

The know-how of the glass setter consists of dosing the heating of each torch, controlling the strokes and speeds of descent, as well as the speeds of rotation of the machine and the tubes, in order to ensure the dimensional conformity of the glass ampoule and in particular:

3. Finishing the glass ampoules, the second stage of the manufacturing process

The various finishing operations are as follows: 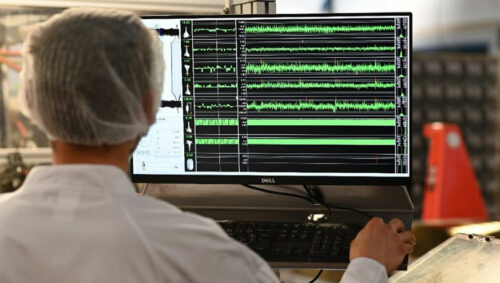 In addition to the capacity, two dimensional dimensions are essential for a glass ampoule:

These two parameters are automatically checked at the beginning of the finishing line by a “vision device” control system. A digital camera transmits an image of each glass ampoule passing through the line to a microcomputer. Specialized software analyses this image and deduces certain dimensions, which it compares with the limit values supplied to it. This device also makes it possible to check other dimensions than those indicated in the previous paragraph.

The system controls an ejector that removes all out-of-tolerance glass ampoules to a single waste bin, but in return the screen constantly shows the average value of the measured dimensions, the number of rejects and the value measured on the rejected ampoules. It is therefore on the basis of the information available on the screen that the setter makes his corrections.

The printing of the glass ampoules includes the inscriptions required by the customer laboratory. The printing is done by screen printing, using a glass enamel that must be baked.

The screens on which the glass enamel is applied are made from template (transparent film printed in black). The glass ampoule is lifted from the chain by a crowbar with rollers. It is positioned under the screen, which is animated by an alternating translation movement synchronized with the chain. It is therefore the screen that drives the ampoule in rotation, while the scraper passes the enamel through the mesh. 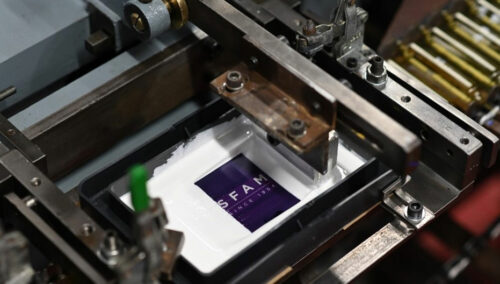 The enamel of the printed glass ampoules needs to be annealed, as does the enamel used in the Self-breaking process (see below). 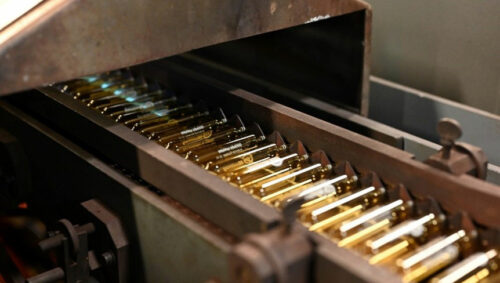 The annealing takes place in an oven, which is a tunnel kiln in which the glass ampoules travel. The temperature is around 600°C and the annealing time depends on the speed at which the ampoules move and the length of the oven.

If the annealing is insufficient, internal tensions may remain, detectable with a polariscope and/or the print will not hold. On the other hand, if the annealing is too strong, there is a risk of deforming the glass ampoules (often referred to as “bananas”).

In order to avoid the use of this file, various self-breakable techniques have been developed. These breakables must be sufficiently fragile for the glass ampoule to open without difficulty, and at the same time sufficiently strong for the ampoule to withstand transport, filling, sealing, packaging (racking and boxing), etc.

Controlling the breaking force (the effort required to open the glass ampoule) is the main difficulty in making a good self-breakable. In addition, it must not generate any risk of leakage or of air entering the filled and closed ampoule and must not release any glass particles when opened.

SFAM uses two processes to ensure that the ampoule is self-sealing, one of which was developed and patented by SFAM: 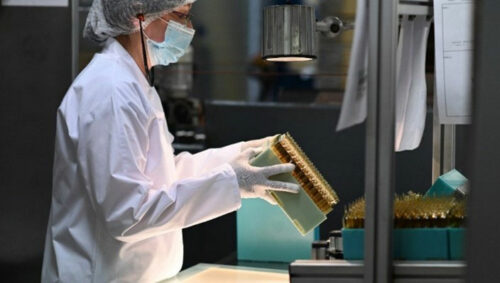 At the end of the production line, after preliminaries and annealing, the glass ampoules are placed in polypropylene boxes, using automatic “automatic packers”. The number of glass ampoules per box varies from 110 to 504, depending on the capacity of the ampoules.

4. Quality control of glass ampoules during the manufacturing process 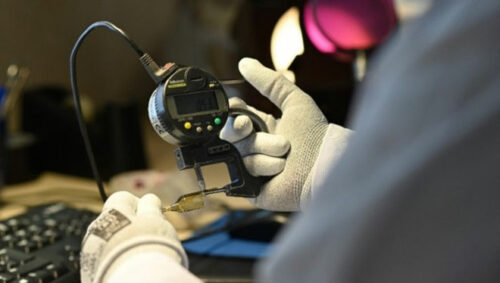 In addition to the automatic controls on the line mentioned above, a visual control of the printing is carried out regularly, at a defined frequency, by:

The production quality specialist takes a few glass ampoules from each line to check all the characteristics of the ampoule, including the breaking strength of the self-breakable glass. 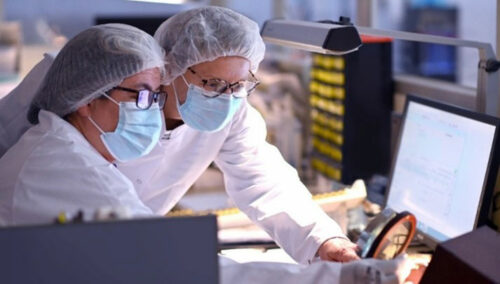 Statistical sampling is carried out throughout the batch. The test report accompanying the batch of glass ampoules is drawn up on the basis of the measurements made on these samples.

5. Filling and sealing, carried out by the customer laboratory 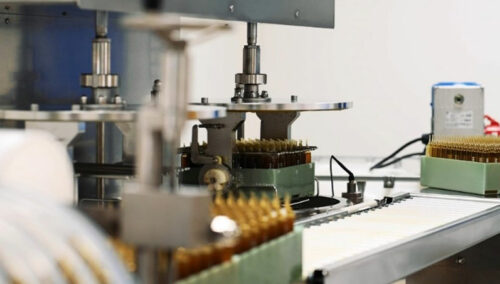 The filling machine consists of a vacuum tank open at the top and fitted with a hinged lid. On this lid, grids are fixed to hold the glass ampoules when the whole unit (the plastic box and all the ampoules it contains) is turned over in the tank.

The whole set is turned over and the lid is closed. The ampoule tips are immersed in the liquid to be filled (medicine, food supplement, etc.), and the tank is emptied. The air in the glass ampoules is evacuated and the liquid fills the ampoule by capillary action. The lid is opened and the box is turned upside down again. Once the box is free of the grid, it is directed to the tips washing and sealing line.

In this way, all glass ampoules are filled in the same cycle to the same volume. 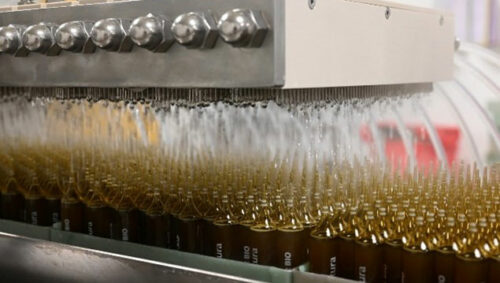 The tips are washed using cold and hot water showers, suitably arranged. The principle is to play on the expansion of the air between the product and the tips. The solid glass ampoule boxes circulate on a conveyor belt under these showers.

A low burner, and a reflector directing heat from the sealing flame further down the line, is used to dry the tips before sealing.

After washing, the glass ampoules, still stored in their box, are passed under the sealing ramp, which is an air/gas/oxygen burner. This flame licks the top of the cut tips, which close naturally. 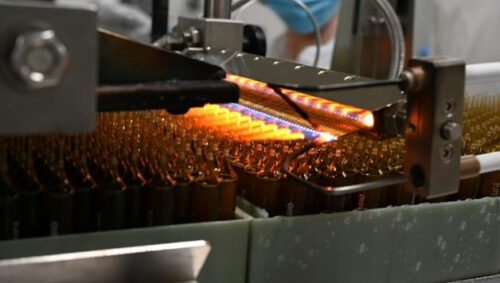 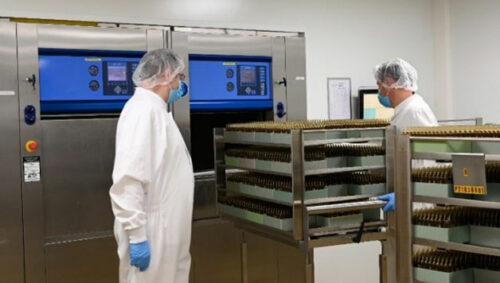 Sterilization can be carried out by tyndallization or autoclaving, in order to eliminate vegetative forms (bacteria) and resistance forms (spores). This involves subjecting the glass ampoules to heating cycles according to the chosen process.

A visual check after sterilization allows the defective ampoules to be eliminated before the others are sent to the packaging line where they are placed on a rack, and the latter are placed in boxes (secondary packaging). 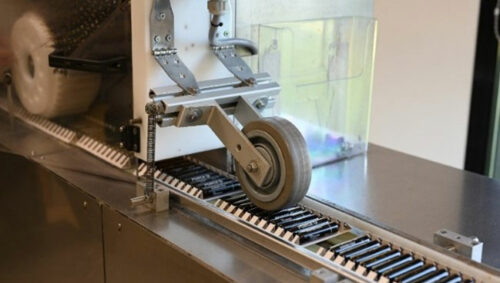 What is trace element therapy and what are its benefits?